The Adelaide Cordial Factory building was erected in 1877 for the manufacturers and importers Stephen & Company. The business was begun in early 1877 by M Stephens and JS Solomon, and was one of several such manufactories established in Adelaide. Under Joseph Clare (formerly of Hall & Sons, Norwood) the firm used the cellar of the building for the manufacture of a vast array of cordials, vinegars and liqueurs: ‘vinegar, Australian stomach bitters, orange bitters, Canadian or gingerbeer bitters, bonekamp, the Doctor and Wermuth bitters and quinine wine cordials, raspberry vinegar, raspberry balm, lemon syrup, peppermint, limejuice, cordial, pineapple cordial, the eye-opener, cherry brandy, ginger brandy, sarsaparilla, ginger wine, rum punch, cloves, and kummel’.   The Adelaide Cordial Factory left the building in 1885. William Adams & Co. Ltd and Crapp & Hawke later occupied the building.

This building has undergone a major transformation: its bluestone walls and brick quoins evident from an early photograph have been completely rendered, and the ground floor has been opened up with a new shopfront and given horizontality and banded square half-columns in stark contrast to the original. The first floor windows with decorative surrounds and round arch heads retain their original appearance. There is a simple parapet above that conceals the roof.

It now operates as a commercial premises.

The building is of heritage value because of its age and because it retains its original scale, form and fabric and exhibits good quality external detailing. It is of value also for the manner in which its distinctive design and detailing reflects the changing commercial nature of Currie Street. It is of particular historical value because of the uses to which the building has been put. It illustrates several key themes in the city’s history: 3.5.2 Retail and Wholesale Industry; 3.5.4 Small Retail Establishments; 4.3 Development of the Building Industry, Architecture and Construction; and 4.5.2 Victorian commercial (1870s to 1890s); 4.6 Heritage and Building Conservation; 4.7.1 Adaptive re-use. 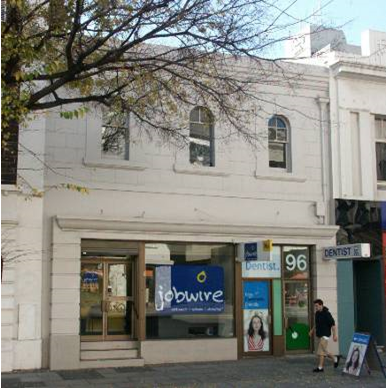