This single storey attached cottage forms the northern end of a complex of five attached cottages: the northern wall is built to the alignment of Kenton Street. Front wall is of sandstone with rendered and painted surrounds to door and window: northern wall is painted. The roof is hipped and of corrugated galvanised iron. Window and door surrounds are timber-framed: main door is timber-panelled, window is double-hung sash. There is a front timber-framed verandah: There are verandahs across the front of each of the cottages that provides a sense of unity, though the verandah to this cottage is not continuous with the others. A feature of the complex is the picket fence and entry gates at the street alignment. A timber screen under the verandah separates the verandah space of this cottage from that to the south.

This house is a private home.

This item is of heritage value because it forms part of a group of attached cottages that retain original fabric, reflect the building’s original form, features of the early residential occupation of the area and complements other (former) dwellings in the area. The heritage value of this cottage is enhanced because it is the northernmost part of a larger complex of several attached cottages. It forms part of what is a relatively rare collection of attached cottages within the city that continue to be used as dwellings. It illustrates several key themes in the city’s history: 2.4 City Dwellers: Householders, Boarders and Tenants; 4.3 Development of the Building Industry, Architecture and Construction; and 4.5.2 Victorian Houses (1870s to 1890s).

Gully began construction soon after because by the end of November 1877 he was noted as the owner of two houses in Cardwell Street. The following year the number had increased to three, and by the next (1879) five houses were noted: two in the possession of Joseph Gully and three in possession of William. By the following year, 1880, all five houses were noted in the possession of William Gully each having an annual assessed value of £28. The Smith Survey of 1880 indicates the outline of all five attached cottages that were constructed between 1877 and 1879.

In 1880, William Gully subdivided the land and a portion—now measuring 92 ft x 95 ft—was sold to Aretas Young, barrister of Adelaide, for 5/- in May 1880. Young disposed of the property in 1881 back to Gully who retained the title until he died on 24 January 1917. The title to the property passed through his executors in March 1917 to Rachel Penn who remained the owner until her death in 1934, and then to Sara Penn of Goodwood in 1935.

In 1948, the property was placed on separate titles. 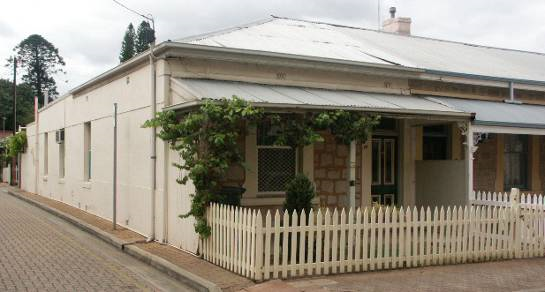