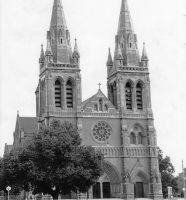 Some of the oldest religious structures of the city can be found in North Adelaide, and they are as varied as the faiths they represent.

Well-known for its grand stone presence on King William Road, St Peter’s Anglican Cathedral has been part of the city’s built heritage since laying of the foundation stone in 1869. Perhaps far more simple but nonetheless significant is the prefabricated cottage of the Quaker Society of Friends Meeting House on Pennington Terrace. Land for its construction was donated by early colonist John Barton Hack in 1839, and it is an important example of the prefabricated timber buildings which were imported into the colony.

Whilst some of the buildings included in this tour are open to the general public, it is important to be mindful that they are predominantly places of worship and have regular services. St Peter’s Anglican Cathedral offers free guided tours on Wednesdays at 11.00am and Sundays at 12.30 pm.

For a printable version, view on Google Maps.

One thought on “City of Churches”